First and foremost, if you have not been on a wine cruise at Patoka Lake Marina…YOU MUST GO! My fiancé and I were a little unsure when we booked the excursion, but we are so happy that we decided to go. We have already booked our next cruise! They offer Sunset Wine Cruises and Fall Foliage Wine Cruises and I have listed the dates for 2020 at the bottom of this article! 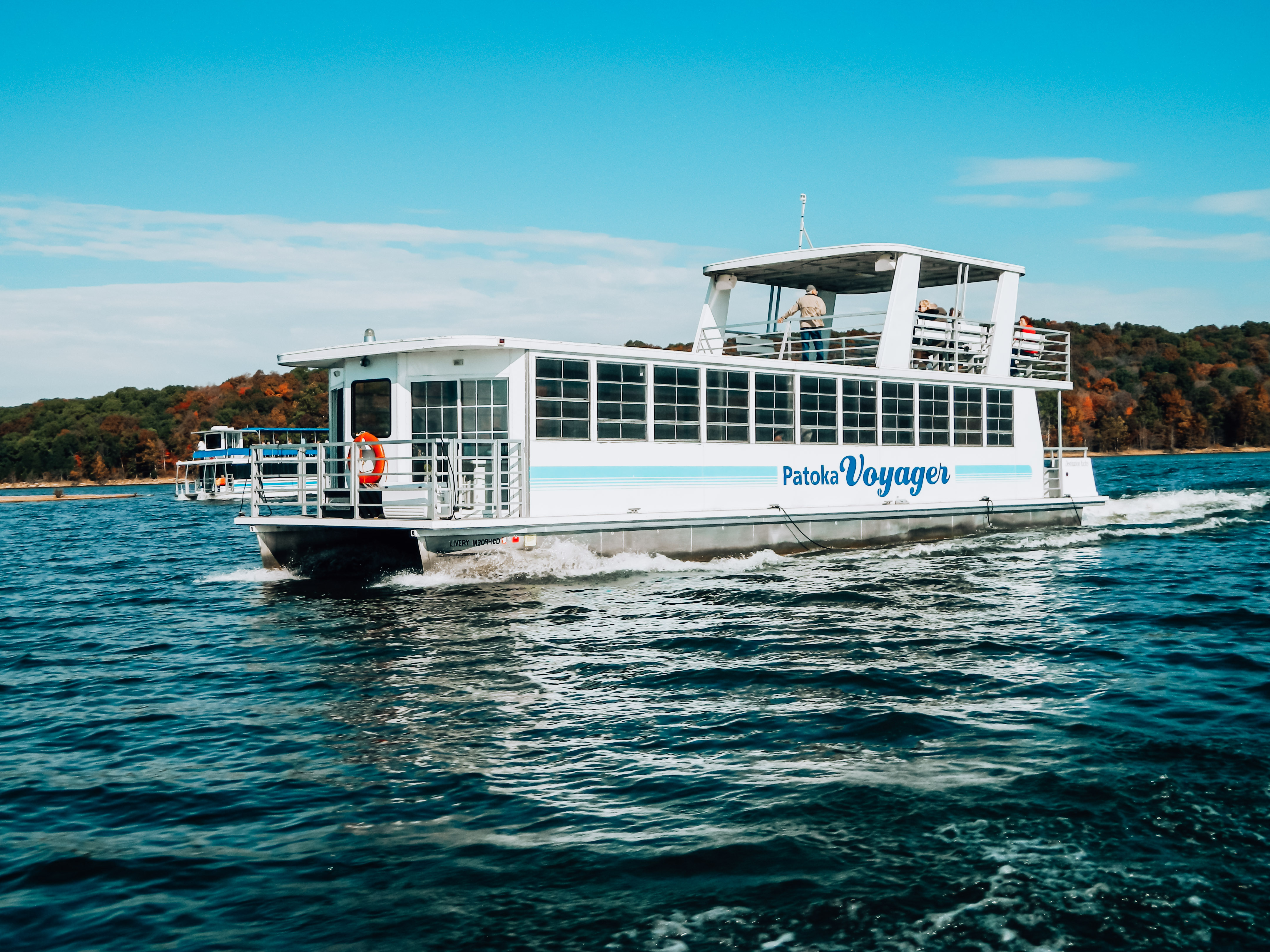 When we stepped onto the Voyager, our seats were at the front table that already had two other couples sitting there. Timidly, we took our seats. Even though we were quite a bit younger than most of the other passengers, our tablemates calmed our nerves instantly with their kind greetings and chitchat. 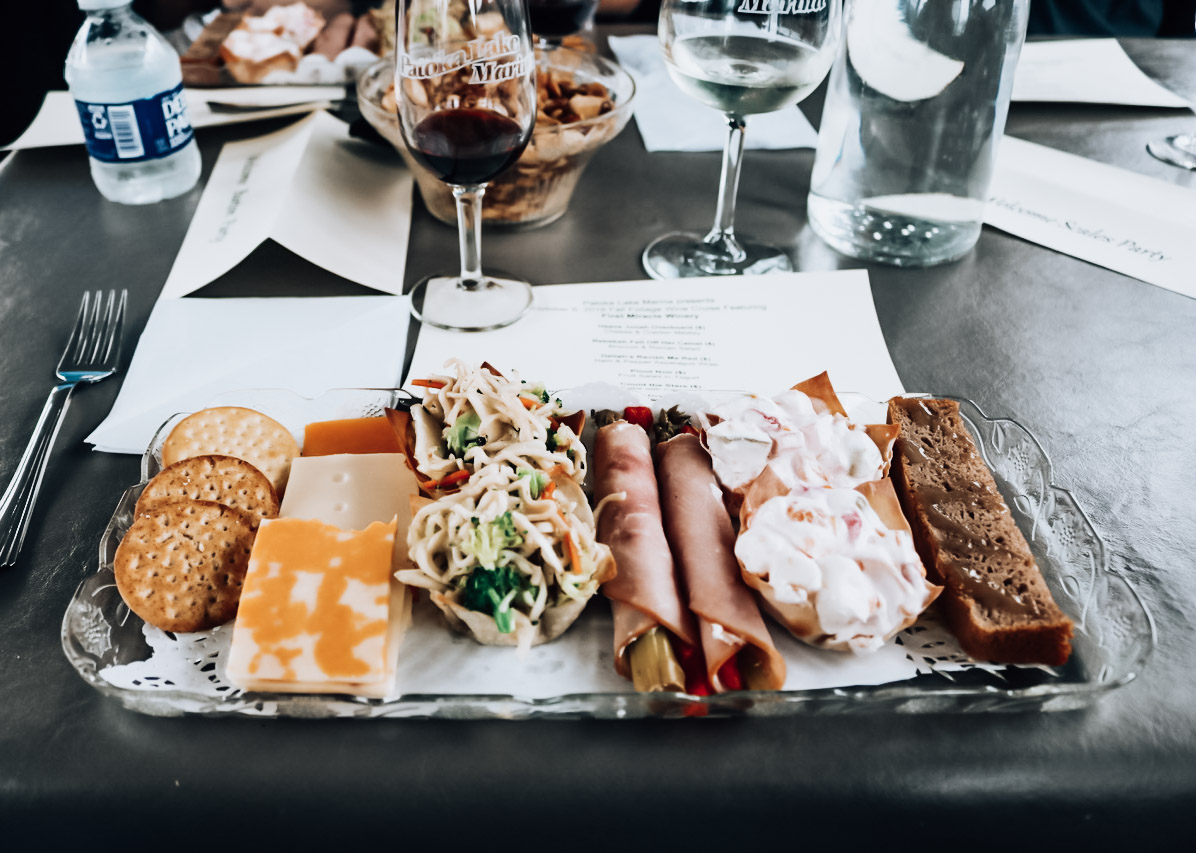 While one of the crew members explained the different types of wine we were going to be trying, another crew member began handing out our food trays. My fiancé and I were pleasantly surprised, as we were unaware that there was going to be food. Score! There was a variety of cheeses and crackers, broccoli and roman salad, a ham/pepper asparagus wrap, fruit salad yogurt, and a slice of apple cake with a caramel drizzle. They also prepared a sheet for each passenger, stating the names of each wine and which food would pair best with it.

Before the first wine was poured, we all got to see a Bald Eagle in a tree along the water. So neat! Patoka Lake Marina also offers Nature Cruises, where passengers can see all the wildlife surrounding the lake including Bald Eagles and Osprey.

After everyone received their food, the wine samples were poured. We sampled 3 sweet wines (Heave Jonah Overboard, Rebekah Fell off Her Camel, and Count the Stars) and 2 dry wines (Delilah’s Ravish Me Red and Pinot Noir). As a surprise, we also got to try 2 bonus wines – another sweet (Job’s Dragon) and a dessert (Chocolate Raspberry)! 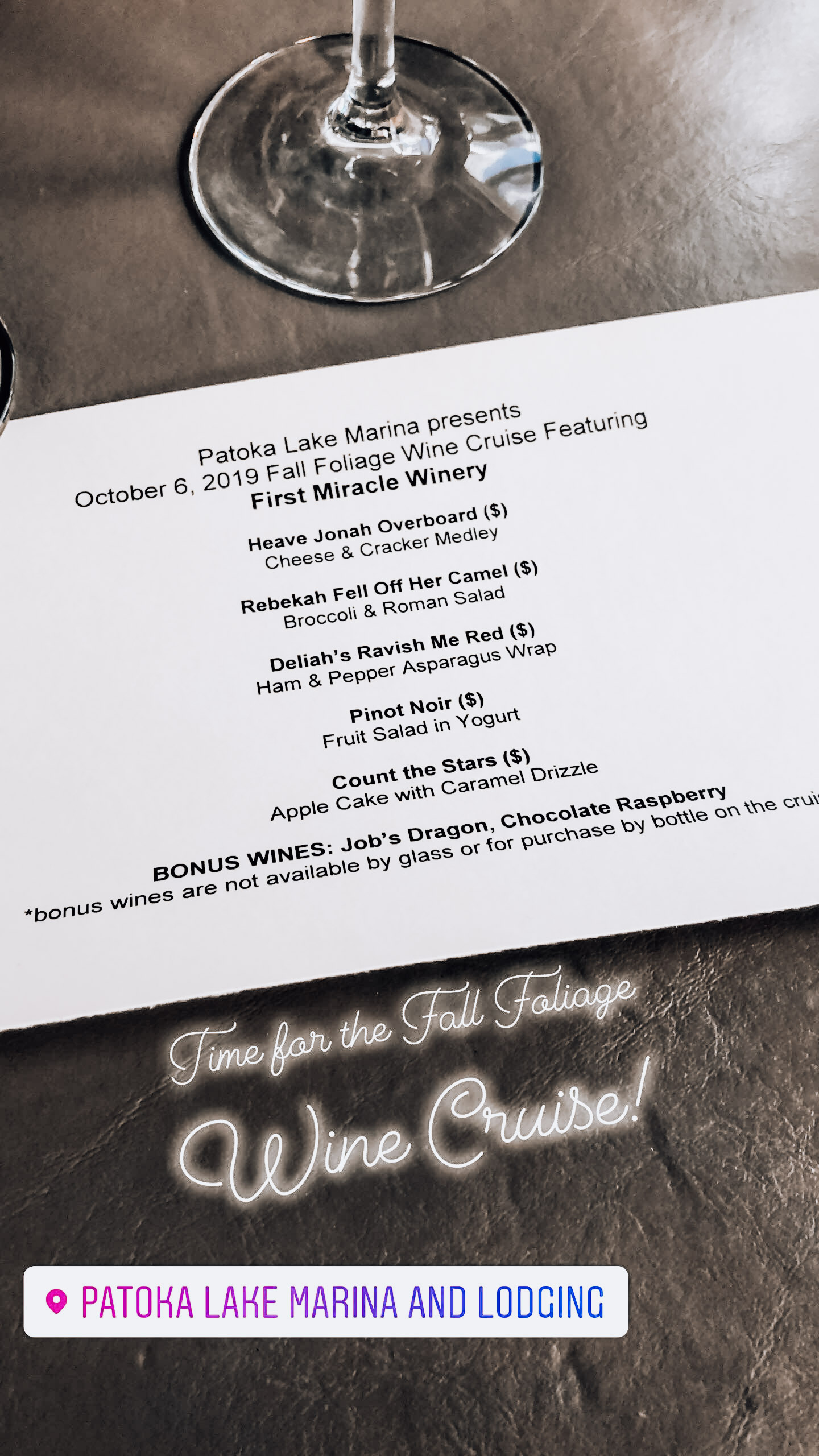 Each passenger was given two tickets when they boarded the boat, to redeem for a glass of their favorite wine after the sampling. Before collecting those tickets, the crew told us to look under our seats. Under one seat at each table was an extra ticket that could be used for a glass of wine or a wine bag. What luck! I had the extra ticket hidden under my seat! 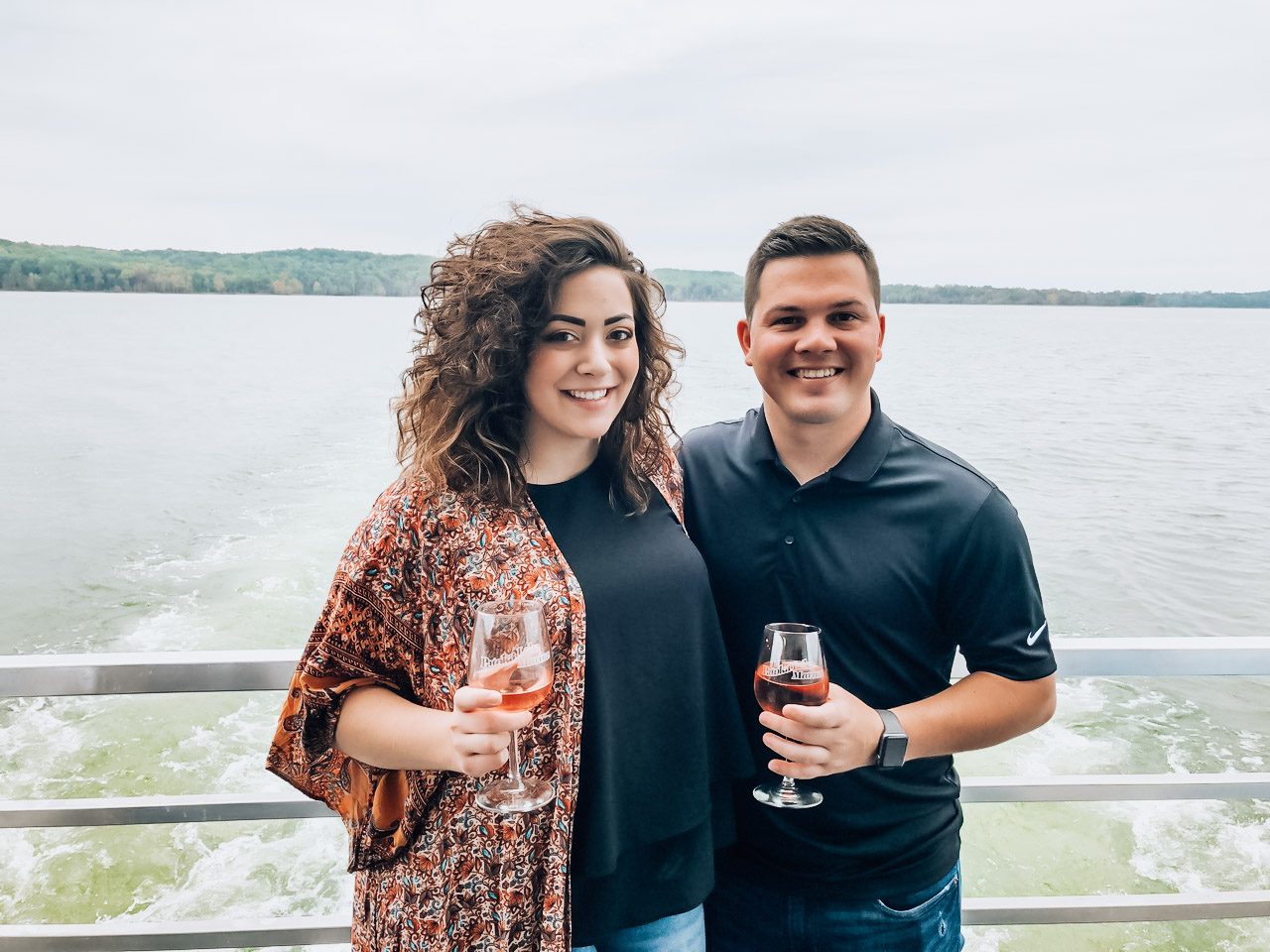 With glasses of wine in hand, everyone started mingling and most of the passengers headed to the top deck. We ventured to the back of the boat to take a few pictures and then we went up top to look out over the water and scenery. It was a beautiful view! However, there were quite a few people upstairs, including the birthday group who was having a great time, so we decided to finish our wines before heading back down to get another glass. 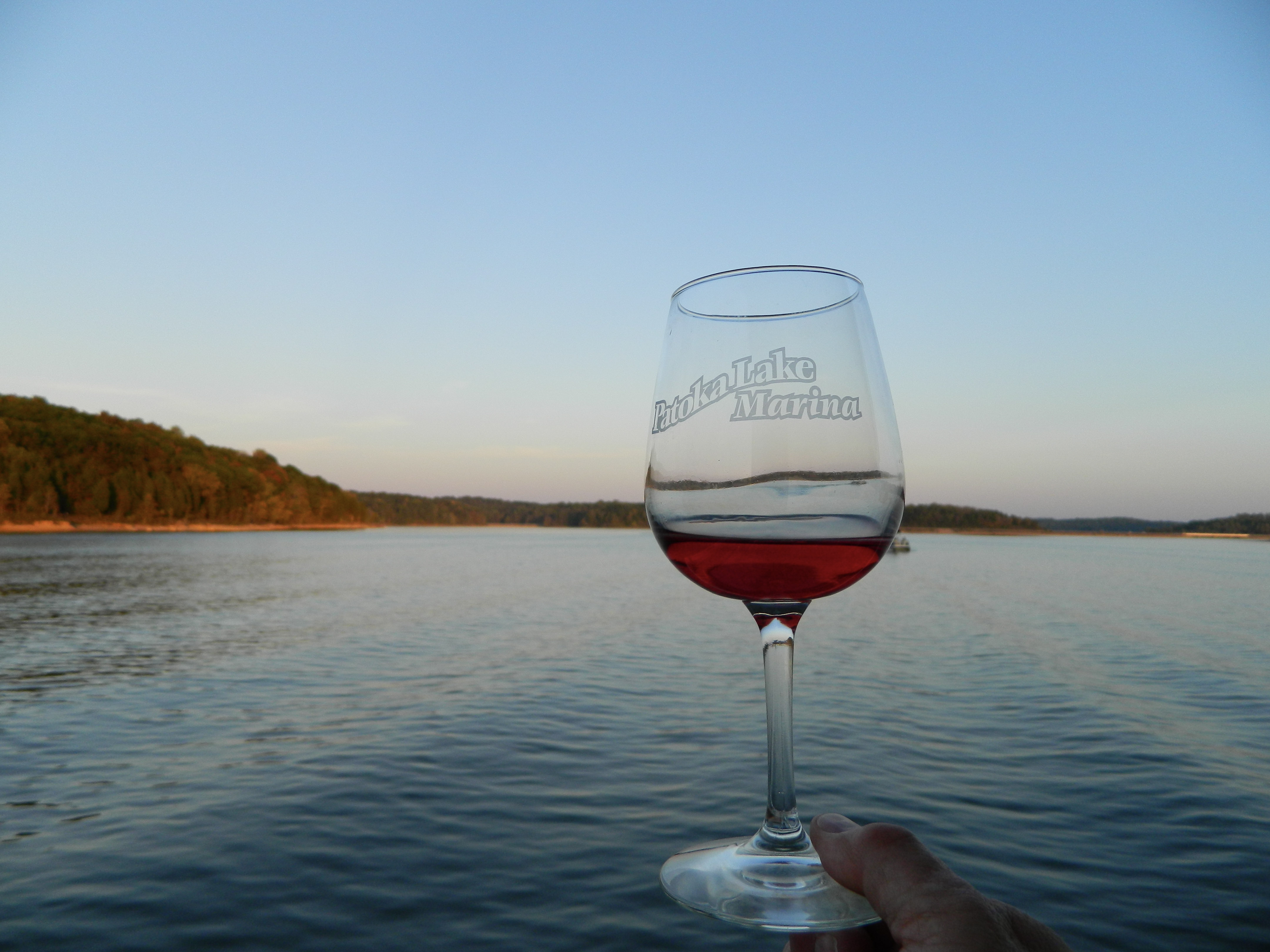 I think everyone on our cruise had a fantastic time, I know that we certainly did! It was so nice to get out for a few hours without our little baby and try something totally out of our comfort zone. All of our doubts and nerves were put to rest because everyone was so kind and friendly, including the staff. We can't wait to go again!

If you're interested in buying tickets, check out our event calendar!

Want to receive the latest French Lick news? Subscribe to our free e-newsletter to learn about upcoming local events, popular activities, and other fun trip ideas.

Find out more how this website uses cookies to give you the best online experience and accept to continue.